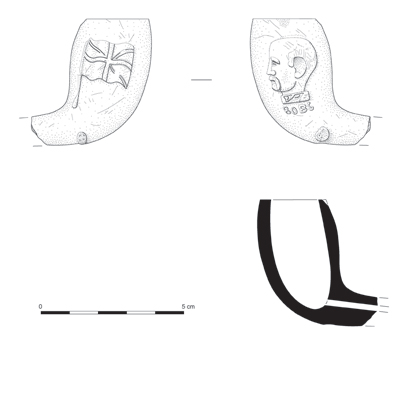 This pipe was found recently at the Garrison Fort community excavations in Leith undertaken by Nick Garry of NG Archaeology. The letters underneath the face read ‘BOBS’. This was the nickname for Lord Roberts, a Victorian Field Marshall, who was one of the most popular soldiers of that era. The backbone of Lord Roberts’ Honour Guard consisted of Veterans of the old Highland regiments who fought under his command in the Crimea and in India during the Mutiny, so it is not surprising to find a pipe depicting him with his nickname here in Leith. Lord Roberts was so popular that when he died in 1914 he was given a state funeral and buried at St Pauls Cathedral, one of only two non-royals of the twentieth century to recieve such an honour, the other being Winston Churchill.